Dennis The Menace Nominated for a BAFTA

Donna Andrews, Sticky Pictures CEO and Executive Producer said; "Sticky Pictures is thrilled to see our production receive this recognition. We share this nomination with our talented team and our fantastic partners including the Nine Network, Red Kite Animation and CBBC"

Jo Rooney and Andy Ryan, co-heads of Drama, Nine Network Australia said: “Our audience loves the larrikin energy of Dennis, Gnasher and their crew. This nomination is a tribute to the passion and creativity of our production partners and we are thrilled to see them receive this recognition.”

The series has been a huge ratings success in Australia and the U.K.  The awards will be announced at a ceremony held at the Roundhouse, London, on Sunday, November 23rd. 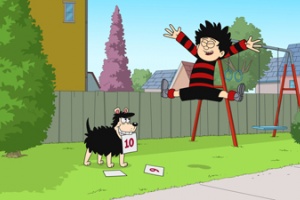