Dukes Nominated in the Cartoons for Teens category at Trickfilm ITFS

The Dukes of Bröxstônia add yet another nomination to their impressive list of accolades. Two episodes from the newest season of the series have been accepted into Trickfilm, Stuttgart’s Festival of Animated Film.

The two episodes, Mojo and Robobarj, will both feature in the ‘Cartoons for Teens’ category at the festival, which runs from April 22 to 27. This is the second time the Dukes have appeared in this category, having also been nominated in 2012.

‘Cartoons for Teens’ focuses on projects aimed at youths aged between 12 and 18. Nominees in the category can include works from animated shorts and animated series to anime, and cut scenes from computer games.

This is one of many awards and nominations the Dukes have enjoyed over the last 12 months. The series has also been featured at Kidscreen and Annecy Animation Film Festival France, along with being nominated for an AACTA (Best Short Animation), an AEF Award (Best Animated Series)  and won the Best Children’s Production aware at SPA 2013. 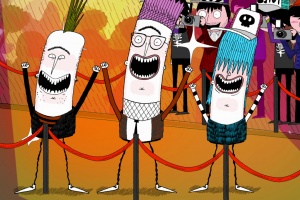