Me & My Monsters Nominated For Kidscreen Award

Me & My Monsters has been nominated for a Kidscreen Award in the Best Non-Animated or Mixed Series for Kids Category.

Winners will be announced at the second-annual Kidscreen Awards ceremony, taking place on Thursday, February 9 in New York at Kidscreen Summit.

Me & My Monsters tells the story of the Carlson family who have recently relocated from Australia to the UK to discover there are three out of control and hilarious monsters living in their basement.

The half hour live action & puppet series was shot in Sydney's Fox Studios.

It is a co-production between Sticky Pictures and Tiger Aspect Productions with the Jim Henson Company (UK). 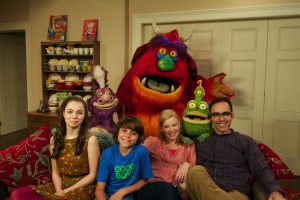