The hilarious ‘contemporary meets classic’ original cartoon series with lashings of adventure “Pirate Express” from Sydney-based production hot-house Sticky Pictures and Canada’s Atomic Cartoons is now on GO! at 7.30am Saturdays - and online via the Jumpin app and website!

Follow the adventures of Captain Newt, a 12 year old boy from Atlantis, and his dim witted crew on the seven seas, onboard the ship Pirate Express!  Newt’s mission?  To watch over a motley menagerie of misfit mariner miscreants and keep the former captain LaPoutine, and his salty shipmates, away from mischief and out of trouble.

It’s a high stakes game for Newt and his buccaneers, because should they fail, the Pirates will be sent back to their ship in a bottle for all eternity. No pressure.

Join Newt, LaPoutine, Armando, Burt, Booli, and Spewey the penguin, as they travel the seven seas and beyond, spreading cartoon comedy…and CHAOS of god-like proportions!

The 26 x 30 minute series for 7-11 year olds recently won Best Musical Score and was nominated for Best Animated Series at this year’s Leo Awards which celebrates excellence in British Columbia Film and Television. The show was also nominated for a Writers Guild Award. 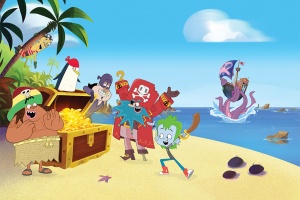