Pirate Express loses out to Game of Thrones

In another Olympic-style upset, Sticky Pics' epic kids show ‪#‎PirateExpress‬ suffered a narrow defeat at the AEAF Awards ... to unheralded indie production Game of Thrones. Who wouldda thought?!  In the best TV series category no less. AEAF's Sean Nash did mention they'd split up the category next year so animated TV series weren't up against visual effects in a TV series - but for now congrats to Rising Sun & Iloura & all the other winners. 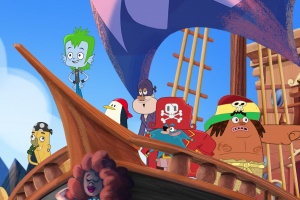