Following its successful run on ABC TV in Australia throughout June and July, the deal sees the BBC acquire the broadcast rights for three years, with the series set to air on BBC Three in late 2017.

Comedian Ronny Chieng, best known for his work as a correspondent on Comedy Central's The Daily Show with Trevor Noah, created and co-wrote the series with writer Declan Fay. Chieng also plays himself in the series based on his life and experiences as an international university student living and studying in Australia.

“Ronny Chieng continues to delight fans across the world with his unique brand of comedy”, said Jessica Ellis, Head of ABC Content Sales and Distribution. “The sale of his latest series to the BBC is a testament to not only his immense talent, but also his growing international following and ability to entertain audiences globally.”

Ronny Chieng International Student is the hilarious story of a Malaysian student studying law in Australia, caught between his old life and his new life, between the international students and the local students, and between his Mom’s expectations and his own dreams. Blunt, barbed and not afraid to cut through BS, it’s not long before Ronny is at odds with most people on campus, from beer drinking Australians, to the Mah-jong playing Asians or the pompous blazer-wearing idiots. 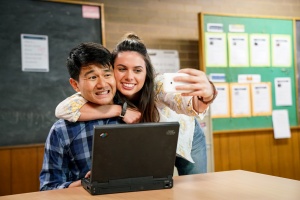