Media Release from the ABC:

Thursday, February 9, 2017 — Production commenced this week on the six-part series of Ronny Chieng: International Student, for ABC in Australia and Comedy Central’s flagship channel in the United States.

Produced by Sticky Pictures (Sammy J and Randy in Ricketts Lane, Skitbox’s Wham Bam Thankyou Ma’am), and written by and starring the internationally acclaimed stand-up comedian, Ronny Chieng: International Student was one of six comedy pilots which aired last year on ABC TV as part of a joint initiative with Screen Australia, Comedy Showroom, and becomes the first to be green lit to full series.

Sticky Pictures’ CEO and Producer of the series, Donna Andrews, said, “We are very excited to be going into series production on Ronny Chieng: International Student.  ABC audiences loved the first (pilot) episode, and we look forward to sharing more of Ronny’s unique comedy style, with stories inspired by his real-life experiences as an international student”.

In the series (as in real life), Ronny Chieng is a Malaysian student who’s come to Australia to study law.  Though smart, driven and competitive, he’s also blunt, barbed, and not afraid to cut through B.S. - so it’s not long before Ronny is at odds with most people on campus. Adding to Ronny’s rollercoaster is his strong relationship with his Malaysia-based mum, which veers between affection and agitation, often in the space of a single conversation, and a friendship with all-Australian classmate Asher (Molly Daniels) that could mean something more… if Ronny can ever work up the courage.

Ronny will be taking time away from his role on the multi Emmy Award winning The Daily Show with Trevor Noah, based in New York, to return to Melbourne and says, “I'm very excited about getting the chance to relive my misspent youth at University and righting all my wrongs. Like in Quantum Leap or Atonement. But with Asians”.

ABC’s Head of Comedy Rick Kalowski, said “Ronny Chieng: International Student’s full series is even better than its hilarious pilot: it’s right on point for Australia today, richly diverse both onscreen and off, and, above all, furiously funny. If you love Ronny Chieng, you’ll adore this”.

Mike Cowap, Investment Manager for Multiplatform, Screen Australia, said “When Ronny Chieng joined forces with go-to comedy producers Sticky Pictures to create this satirical take on the Aussie student experience, we weren’t surprised to see it become a highlight in the Comedy Showroom showcase. We are delighted to be supporting this into a full season where it will again bring to the screen its distinct international flavour alongside a diverse cast and hilarious script.”

Film Victoria’s CEO, Jenni Tosi said, “Victoria is renowned for comedic talent and we’re delighted to be supporting Ronny Chieng: International Student which will shoot at Melbourne University and other locations around Melbourne.”

The series will hit screens on ABC TV and iview in mid-2017, with its U.S. premiere on Comedy Central to follow. 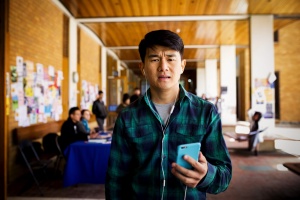