Sammy J and Randy on pilots, cults and fart jokes

Screen Australia: Can you talk us through the genesis of Sammy J and Randy?

Sammy J: We really wanted to create a fun, vibrant, groundbreaking show that included elements of sitcom, live comedy and musical theatre all in one.

Randy: Then we ran out of time and wrote this instead.

SJ: Those deadlines really did sneak up on us, didn’t they?

R: I mean, we’re still proud of the show, don’t get us wrong.

SJ: It’s just that it took a bit of a turn. I mean, one minute you’re writing a cheeky six-part comedy series …

R: And the next minute it becomes a dark, black and white drama set during the Boer War.

SJ: With no dialogue.

R: With no dialogue.

SJ: I’m still shocked nobody stepped in and cancelled it during the development phase.

R: I blame the director. Screen Australia: Ricketts Lane is an award-winning live stage show, at what point could you envisage it being adapted for TV?

SJ: We’d actually wanted to do TV from the very start.

R: But nobody was particularly interested, so we decided to write a stage show instead of making a pilot.

SJ: This is completely true – we originally wanted to call the stage show “Ricketts Lane: A Blatant Sitcom pitch”.

R: If you go back and watch the original live show –

SJ: Which you can’t, because it’s never been released –

R: Sure, but IF you did, you’d see all the building blocks for the TV show were in there to begin with.

SJ: I was playing a terrible lawyer …

SJ: I was devilishly handsome …

R: I don’t remember that bit?

SJ: But somehow the plan worked, because here we are promoting our new TV show! Screen Australia: What was your favourite part of making the TV series?

SJ: My favourite part was having someone on set who would write their name on my water bottle.

SJ: Not sure. But every day somebody was paid to do that.

R: My favourite part was when I got to convince the entire crew to join my new cult and move to rural New South Wales with me.

R: Not bad! Only three fatalities so far.

SJ: Please tell me the caterer is still with us?

R: Of course. He’s keeping us all very well nourished as we pledge allegiance to the Sun God.

SJ: But does he write your name on your water? Screen Australia: How did you find writing a sitcom compares to writing for the stage?

SJ: To be honest we never really write for our live shows. We just get on stage and make it up.

R: And hope that people laugh.

SJ: So there was definitely a change in process for TV, because the fat cats in their suits apparently needed to see “Scripts” and “Episode Overviews” and so on.

SJ: Seriously, why can’t they just let us turn up, start filming, and let us work our magic?

R: But no, apparently the “Producer” needs to know “details” so they can “organise the shoot”.

SJ: I was close to quitting by the end of it.

R: It’s nothing but an assault on our artistic freedom.

SJ: Things are going to have to change for Series 2.

Screen Australia: How did you change the scope or arc of the stage show to transform it into a six-part series?

SJ: Actually, and I’m being honest here, it was pretty much a case of starting from scratch.

R: We did try to turn one of our stage shows, “Bin Night”, into an episode, but all the jokes and narrative were so theatrical it just wasn’t working.

SJ: So then we pretty much approached it as a new project, but with the same characters, and sense of humour.

R: But on the upside, we got to do a lot more on telly than we could ever get away with on stage.

SJ: Yep. It’s quite nice being able to have a whole team of talented people working to build your world up for you.

R: Like, when we wrote a scene in prison, we had a location scout find us an actual prison, then the art director and his team dressed it all, and the costume designer made all these prison outfits, and the whole unit took over a prison for a day.

SJ: Whereas on stage we would probably just do a voice over that says “OK guys, everyone pretend we’re now in a prison.”

Sammy J and Randy in Ricketts Lane is available on ABC iview now! It will air on ABC TV later in the year too. 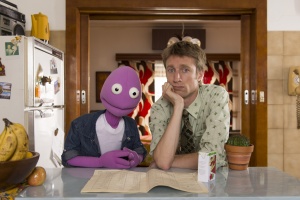