Sydney based Sticky Pictures has been named Children’s Television Producer of the Year at the 2011 SPAA Independent Producers Awards in Sydney.

Headed by Donna Andrews, Justine Flynn and Stu Connolly, Sticky Pictures this year produced live action sit-com Me & My Monsters and animated series The Dukes of Bröxstônia. Their previous projects include animated series Dennis & Gnasher and Pearlie based on the Wendy Harmer books.

The SPAA Independent Producer Awards, established in 2001, are awarded to SPAA members who have produced an outstanding body of work that has contributed to the advancement of the independent production industry. The peer-voted awards were announced last night during the Screen Producers Association of Australia annual conference.

Sticky Pictures CEO Donna Andrews said: “Sticky Pictures is thrilled to be recognised for our work by our peers. Thanks to our fantastic broadcaster partners at home and abroad including the ABC, Network Ten, Nine Network, Nickelodeon and Cartoon Network Australia”. 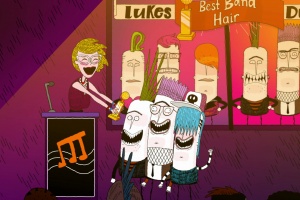