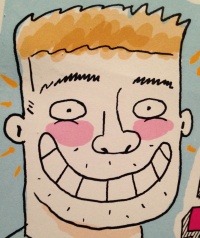 Having long dreamt of a career in film and television Michael left the security of his job as a bank manager to pursue a role as a screenwriter.  His first break in the industry was as a Storyliner on over 45 episodes of the long-running Australian series, Neighbours.  Following this Michael was Sticky Pictures’ Production Assistant on the company’s series, Pirate Express.  This role expanded his experience and knowledge in the industry as he assisted in writer meetings as well as on the series’ storylines and it also gave him his first writing credit.

“I am thrilled to be welcoming Michael back to Sticky Pictures – this time in the capacity of Development Executive.  Michael has a strong and enthusiastic interest in the entertainment space and has a passion for developing great storytelling and translating these story ideas to the animation world.  Early on in his role at Sticky Pictures, we recognised Michael had strong skills in project assessment, script review and development which will make him an invaluable asset to our team at Sticky Pictures,” said Sticky Pictures’ Partner, Stu Connolly.

As part of Screen Australia’s ‘Enterprise People’ program, Michael was one of ten candidates chosen for the industry’s annual placement scheme that allows for the selected candidates to work alongside the industry’s best and brightest.

Providing on-the-job training and an opportunity to secure long-term and sustainable employment as a screen practitioner, Screen Australia’s ‘Enterprise People’ is part of the organisation’s three year, $10 million suite of Enterprise programs that aim to facilitate screen business to invest in development, talent and innovation for the benefit of the sector.