Digital Media World interviews Dukes creators Stu Connolly and Suren Perera about the new series of The Dukes of Bröxstônia.

The series, produced in 2D Flash animation, follows the adventures of the teenage Dukes - singer Arj, drummer Barj and guitarist Larj. The new format is based on a Bröxstônian TV broadcast - complete with Bröxstônian advertisements and channel idents - all in the nonsensical local language. The new series made its worldwide debut on ABC3 on 15 April 2013. Since its initial launch, the series has earned nominations for best tween/teen series at Kidscreen Awards, Cartoons on the Bay, Sicaf Korea, Stuttgart Animation Festival and most recently at the Annecy Animation Festival 2013. 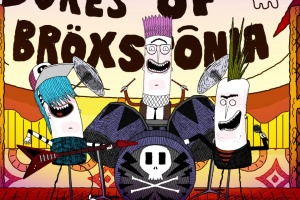