The proposed half hour comedy series starring stand-up comedian and actor Ronny Chieng is one of six ABC Comedy Showroom pilots.  The first episode of each pilot will be shown to ABC audiences in 2016 and viewers will be given the opportunity to vote on which they would like to return as full series.

“I am thrilled ‘Ronny Chieng: International Student’ has been selected for this year’s ABC Comedy Showroom primetime comedy pilot line-up.  Ronny has become a household name since winning Best Newcomer at the Melbourne International Comedy Festival in 2012.  And his recent appointment as a full-time correspondent for the US’ The Daily Show has really catapulted his international comedy status.  ‘Ronny Chieng: International Student’ is a hilarious series following Ronny as he's caught between his old life and his new life, between the international students and the local students, and between his mum’s expectations and his own dreams.  I hope ABC audiences enjoy the first episode of the series and cast their vote to see more of Ronny as he struggles through the unchartered waters of being an international student,” said Sticky Pictures’ CEO and Executive Producer Donna Andrews.

Meet Ronny Chieng.  He’s a Malaysian student who’s come to Australia to study law.  He’s smart, driven and competitive, which would make him the perfect law student, if he actually wanted to be a lawyer.

Blunt, barbed and not afraid to cut through BS, it’s not long before Ronny is at odds with most people on campus.  As a genuine outsider, Ronny is super suspicious of any group that wants him as a member, be it the beer-drinking Australians, the Mahjong playing Asians or the pompous blazer-wearing... idiots.

Ronny has a strong relationship with his mum, which veers between affection and agitation, often in the space of a single conversation.  Thanks to his parents, Ronny’s student life in Australia is pre-paid, but only if he meets his Mum’s high expectations of being a model Asian student who WILL become a hugely successful lawyer.  And if Ronny ever forgets this, his mum is ready to skype him, multiple times, on the same day.

ABC Comedy Showroom is a joint initiative with Screen Australia.  In association with Film Victoria, Screen NSW and ScreenWest.

Sticky Pictures has enjoyed creative collaborations with major production companies including Tiger Aspect Productions, the Jim Henson Company, FremantleMedia, Nelvana and Atomic Cartoons.  Sticky Pictures television productions have sold to more than 100 countries.  Sticky Pictures is a multi-award winning, BAFTA nominated studio and was named Children’s TV Producer of the Year by the Screen Producers Association of Australia (2011).  In 2013, The Dukes of Bröxstônia was named Childrens TV Production of the Year by SPA. Sticky Pictures’ shows have featured in the Annecy international animation festival and in film festivals across the world. 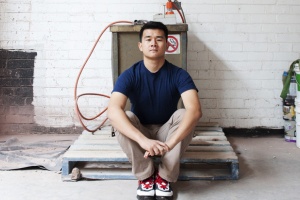