Sammy J & Randy in Ricketts Lane from Australian production hothouse Sticky Pictures has been confirmed as part of the line-up for NBC Universal’s new US comedy focussed subscription channel, SeeSo, launching in the US on January 1st 2016.

The six-part musical comedy series is the first live-action prime time series for Sticky Pictures in association with ABC TV, Film Victoria and Screen Australia and will feature on SeeSo alongside acclaimed shows including The Office, The Tonight Show Starring Jimmy Fallon and new original series The UCB Show with Amy Poehler.

Currently airing on ABC TV in Australia (Wednesdays 9.30pm), this is the first comedy television series for Sammy J & Randy, who recently appeared in Neil Patrick Harris’ Gala at the Just For Laughs Festival in Montreal.

A musical comedy about two mismatched housemates from the acclaimed comedic duo, Sammy J & Randy - Sammy J is a hopeless, down-and-out lawyer who, six years into his legal career, is yet to win a case.  And Randy is a cheating, gambling, drinking divorcee who also happens to be a purple puppet.

“It is incredibly exciting to have our first live-action prime time series picked up for NBC Universal’s SeeSo launch in the US.  It’s a testament to the quality and universal comedy of Sammy J & Randy.  I’m extremely proud of the very talented duo, and of the series.    Sammy J & Randy in Ricketts Lane will be one of the funniest and most daring comedies seen on screens in the US next year” said Sticky Pictures’ CEO and Executive Producer Donna Andrews.

’We are thrilled that our show will be heading to America.  The hardest thing was convincing US audiences one of the main leads was a puppet, but once they accepted Sammy J, it was an easy sell’, said Randy.

Sammy J & Randy in Ricketts Lane also stars Nathan Lovejoy (This is Littleton, At Home with Julia), Georgia Chara (Wentworth, Home and Away) and Samantha Healy (Mrs Biggs, McLeod’s Daughters) and, in his debut role, an alpaca named Kerry.

ABC Commercial, who placed the series with SeeSo as the distributor worldwide, said “we are thrilled to see this iconic Australian comedy series included with such a great line-up on NBCU”.

In an already announcement-bursting month, Sammy J & Randy’s US launch comes hot off the heels of their Australian TV debut, an ARIA nomination for Best Comedy Release, and a debut season for Just for Laughs at the iconic Sydney Opera House next week.  Merging comedy, music and puppetry, Sammy J & Randy have played to sold-out audiences in Australia and internationally.  In 2010 Sammy J & Randy won Australia’s most coveted comedy award, The Barry, for their one-man/one-puppet show, Sammy J & Randy in Ricketts Lane.    They are without question two of the most sought after comics in Australia today.  Now Sammy J & Randy are ready for their biggest adventure yet! 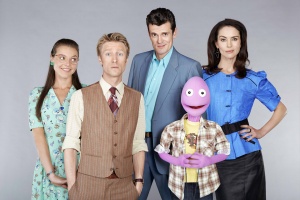