Donna Andrews, CEO & Executive Producer in her speech thanked ABC, ABC Commercial, Screen Australia, Film Victoria and cast and crew. "Thank you to Declan Fay and Ronny Chieng who are the creators and co-writers of the short film. And to Jonathan Brough who we like to call Australia's Number 1 Comedy Director for realising our dream for this. Thank you Sticky Pictures and Naomi my absolute right hand person who I couldn't have done this without!"

Ronny Chieng: International Student Pilot, a Sticky Pictures Production, was part of the ABC Comedy Showroom. That is a joint initiative with Screen Australia; and in association with Film Victoria, Screen NSW and ScreenWest. 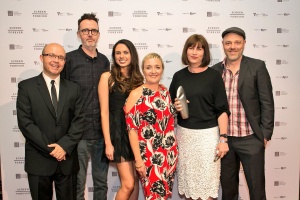