The show will this year begin airing on POP in the UK in October and on Teletoon in Poland in December, with MBC Group debuting the show in MENA in September 2017. eOne is in advanced discussions with broadcasters in additional territories, including France, with details coming soon.

Already on board for Winston Steinburger are co-production partners ABC ME (Australia) and Teletoon (Canada), plus Clan TVE (Spain) and BIGGS (Portugal). The series recently launched in Australia and will roll out in additional territories through autumn.

Winston Steinburger and Sir Dudley Ding Dong, aimed at kids 6-12, follows the hilarious hijinks of thrill-seeking space kid named Winston Steinburger, his feline best friend, Sir Dudley, and an uptight alien, Hampton. Exploring the galaxy in a homemade space cruiser, the three astronomical amigos square off against bubbling planets, bad-breathed space-bandits, and their worst nemesis: Pam the Destroyer, a manic tween with an itchy trigger finger and a mega crush on Winston. 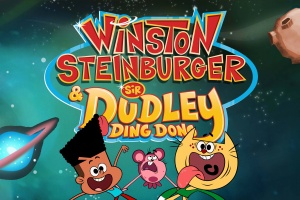