Entertainment One (eOne) has secured broadcast sales for its new 2D-animated comedy series Winston Steinburger and Sir Dudley Ding Dong in two key European territories. The news follows shortly after the series premiere on Teletoon in Canada, where it airs twice on weekdays and on weekend mornings. Corus is bolstering the show with bonus content on social media and a recently launched gaming app.

Season one of Winston Steinburger (52 x 11; kids 6-11) was picked up by Cartoon Network in France and pubcaster OUFtivi in Belgium. The show will launch in France in February and in Belgium in June of 2017.

Prior to the most recent deals, Winston Steinburger season one had sold to Clan TVE (Spain) and BIGGS (Portugal). Recent broadcast launches include ABC ME (Australia) and KIX (UK), where it performs at 62% above the channel average and ranks in its top 10 shows. The toon will also be heading to MBC Group’s channels across MENA in September.

Winston Steinburger and Sir Dudley Ding Dong follows the hilarious adventures of thrill-seeking space kid, Winston Steinburger, his feline best friend, Sir Dudley, and an uptight alien, Hampton, as they explore the galaxy together in a homemade space cruiser seeking out fun adventures, facing death on a daily basis, and evading Pam the Destroyer – a tweenie bopper with a manic personality, an itchy trigger finger and a mega crush on Winston. 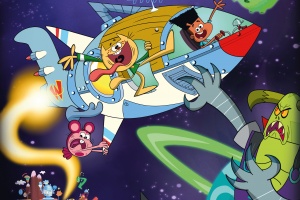