Sammy J and Randy premiere on iview in September

ABC press release: ABC is thrilled to announce, that from September 1st, the entire six-part comedy series, Sammy J and Randy in Ricketts Lane, will be available to binge watch on ABC iview first, before airing on ABC TV later in the year.

With their unique brand of comedy, music and puppetry, Sammy J and Randy have played to sell-out audiences across Australia and overseas.

The award-winning comedy duo says “This is an appalling, undergraduate series that should never have been made. We salute the ABC for giving viewers the opportunity to watch it swiftly and then move on with their lives.”

ABC Head of Comedy Rick Kalowski says "As usual, Sammy J & Randy have no idea what they're talking about. Sammy J & Randy In Ricketts Lane is a brilliantly original piece of musical comedy joy you'll want to smash through in one go, then watch all over again. We love it".

Sammy J and Randy in Ricketts Lane also stars Nathan Lovejoy (This is Littleton, At Home with Julia), Georgia Chara (Wentworth, Home and Away) and Samantha Healy (Mrs Biggs, McLeod’s Daughters) and, in his debut role, an alpaca named Kerry.

In the series, Sammy J is an obsessive, socially inept and altogether hopeless junior lawyer scrambling to hold onto his last ounce of dignity while clinging to the bottom rung of the corporate ladder. Meanwhile his slovenly housemate Randy has seen the world from all angles. He’s an opinionated, unemployed opportunist, desperately trying to win back the affections of his glamorous ex-wife... and he’s a purple puppet.

While they’re loyal, eccentric and prone to burst into hilarious song at any given moment, tensions between the man and puppet will increase. Watch it all in September exclusively and for free on ABC iview here: 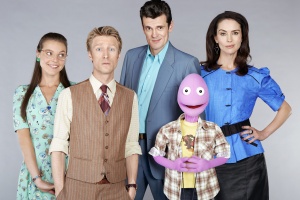