This follows on from wins at the AEAF Awards (Australian Effects & Animation Festival) earlier in the year.

The show is also nominated for an Asian TV Award for Best 2D Animated Programme.

The show created by Mike Geiger is an official co-production between Sticky & eOne Family for ABC Me and Teletoon.

Distributed by eOne the show airs in the UK, Canada, Australia and across Europe. 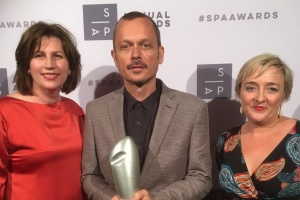