Sammy J & Randy in Ricketts Lane has been nominated for Comedy Series Production of the Year. Broadcast on ABC and iView in late 2015, the series has been picked up by US streaming comedy channel NBCU’s Seeso and Netflix UK. Critically acclaimed as "the most deliriously funny and surreal comedy Australia's produced for quite a while”, Sammy J & Randy in Ricketts Lane is a musical comedy about two mismatched housemates from acclaimed comedic due, Sammy J and Randy. The ground-breaking series was nominated for 3 AACTA Awards in 2015, and director Jonathan Brough was honoured with an Australian Directors Guild Award for Best Directing in a TV Comedy. The series is available for download via iTunes and Google Play.

Ronny Chieng: International Student is a finalist for the Cutting Edge Short Film Production of the Year. Starring stand-up comedian Ronny Chieng (now New York-based correspondent on The Daily Show with Trevor Noah), this half hour comedy was produced for the ABC Comedy Showroom, a joint initiative with Screen Australia. Ronny plays himself - a Malaysian student who’s come to Australia to study law. He’s smart, driven and competitive, which would make him the perfect law student, if he actually wanted to be a lawyer. Available for download via iTunes and Google Play.

The awards will be announced at industry conference #SCREENFOREVER on Thursday 17th November, at Crown Palladium in Melbourne.

To check out all the award nominees, head to the SPA YouTube channel: 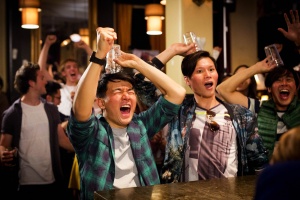